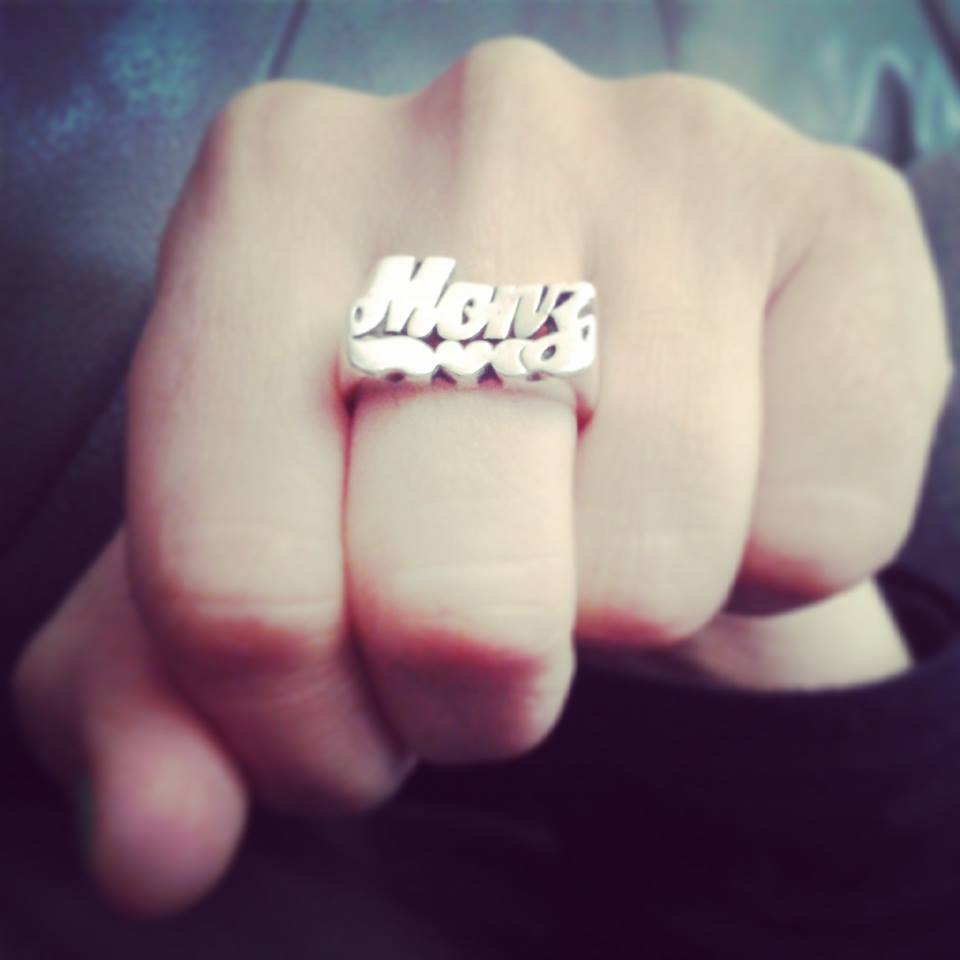 Women into the limelight

Dancers, contortionists, new image-symbol and pop-culture singers/stylists are the main subjects of Elena Monzo artworks. This new series of works – now on show @ Colossi Arte Contemporanea, curator Alberto Mattia Martini – is discovering the maturity and evolution of the artist in the research work about the female figure in nowadays society. The artist undergoes a profound analysis of commonly accepted patterns of this society, challenging them with the same tools: glitters, make-up, shocking colours, textiles and fashion images. The result is a collage work creating new and unconventional individuals – I would say, both sex-symbols (singers, actress, models from gossip magazines and fashion world) and odd individuals (drag queens, transgender, circus contortionists) of our society. The clash between what is accepted and not-accepted explodes with its huge power on the works on paper. In general, the show displays a good balance between white (Elena Monzo’s most distinctive production since her beginning) and colour surface (her latest development). The development of the collage technique is remarkable: the artist takes confidence with new materials and tools that merge perfectly with her unique drawing ability. The line on the white surface emerges sharp and clean, no hesitation is showed. Seems like she translates clearly the female idea in her mind onto the surface. Elena Monzo’s premier dames are inviting you to have a cup of tea, tasting hand-made cup cakes and to chat together in a relaxed Sunday afternoon. 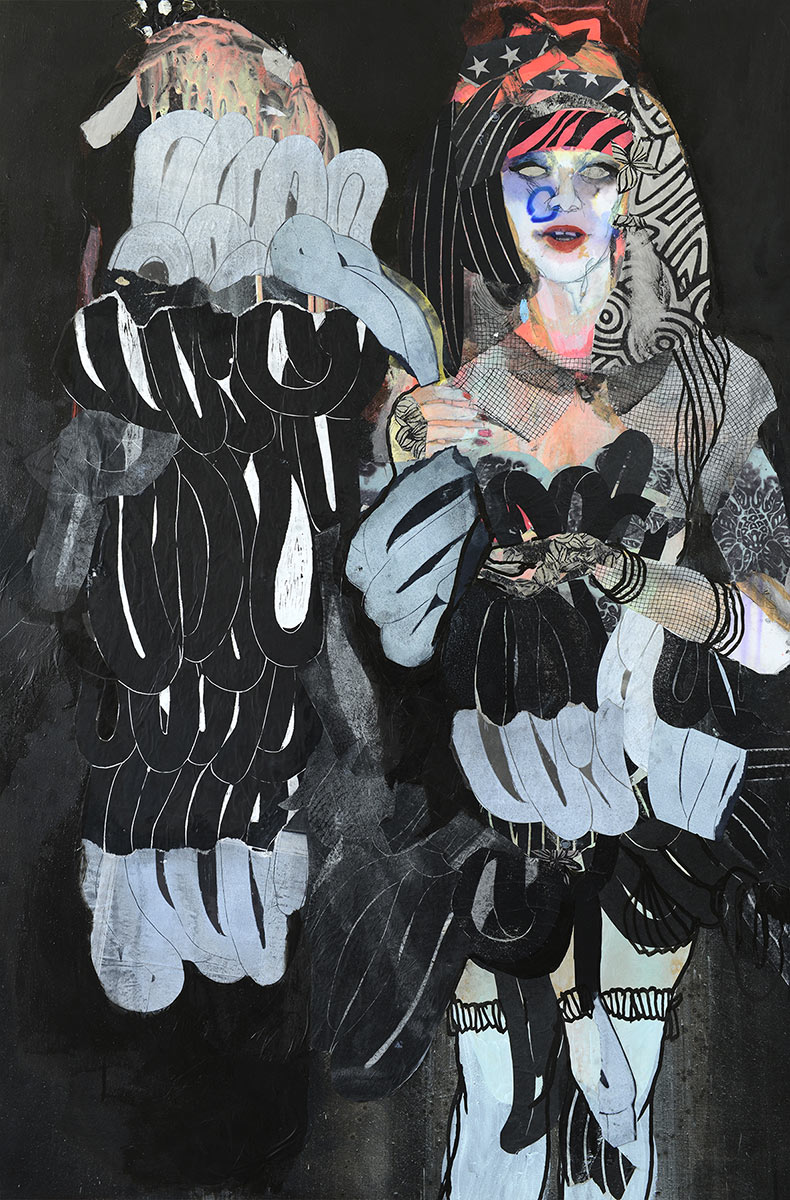 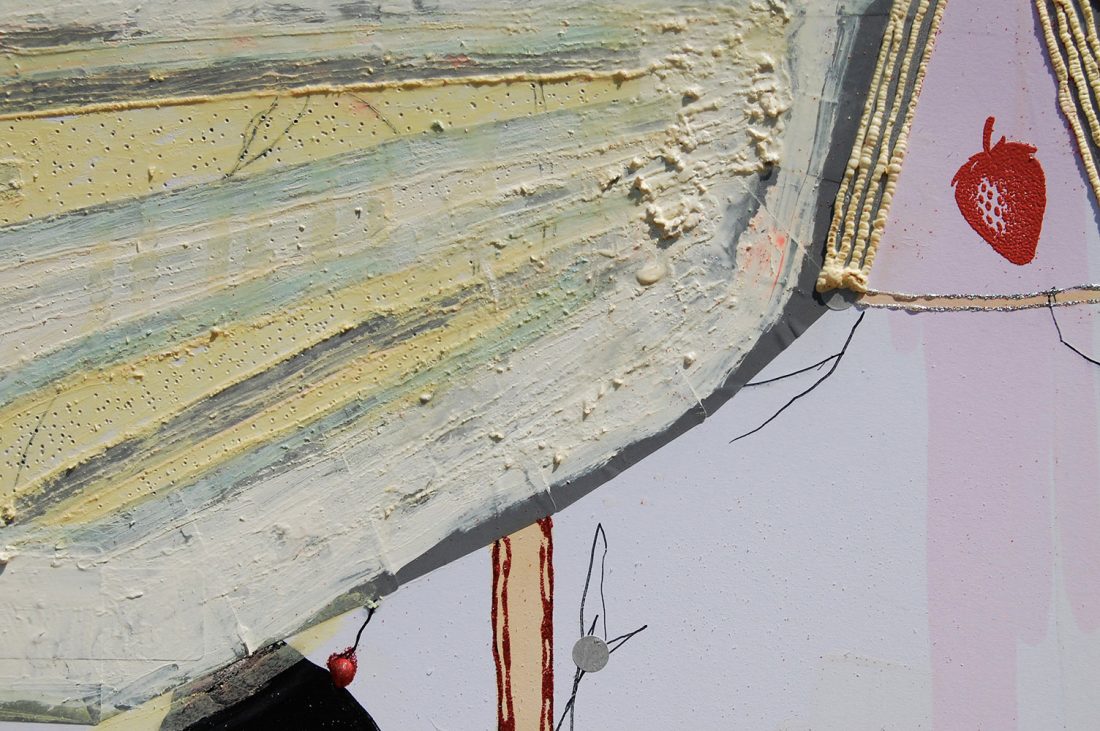 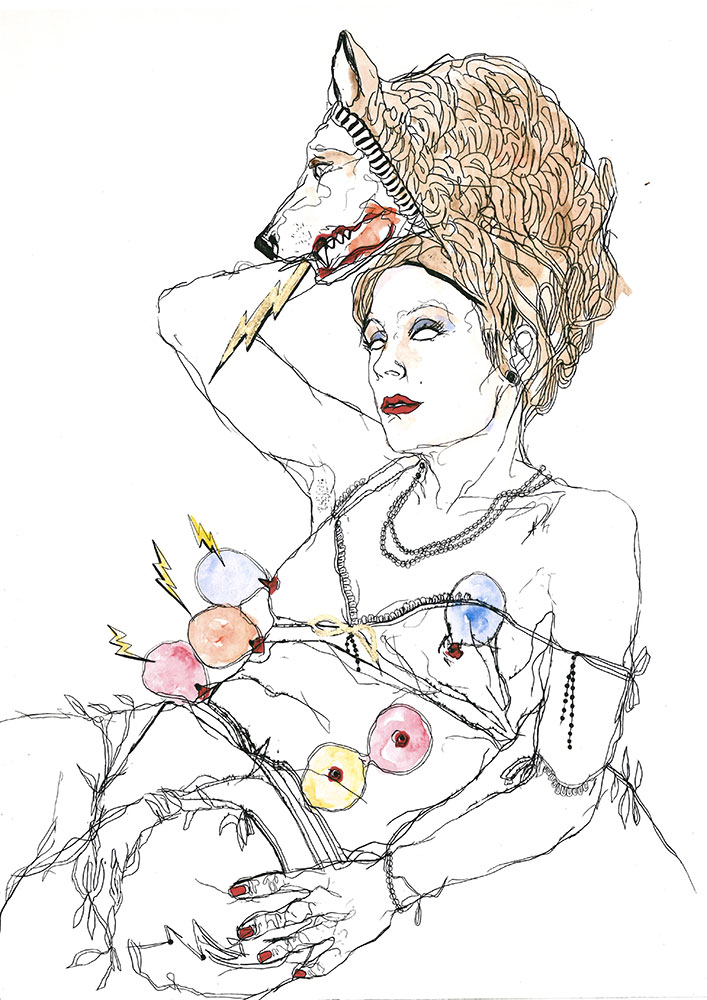 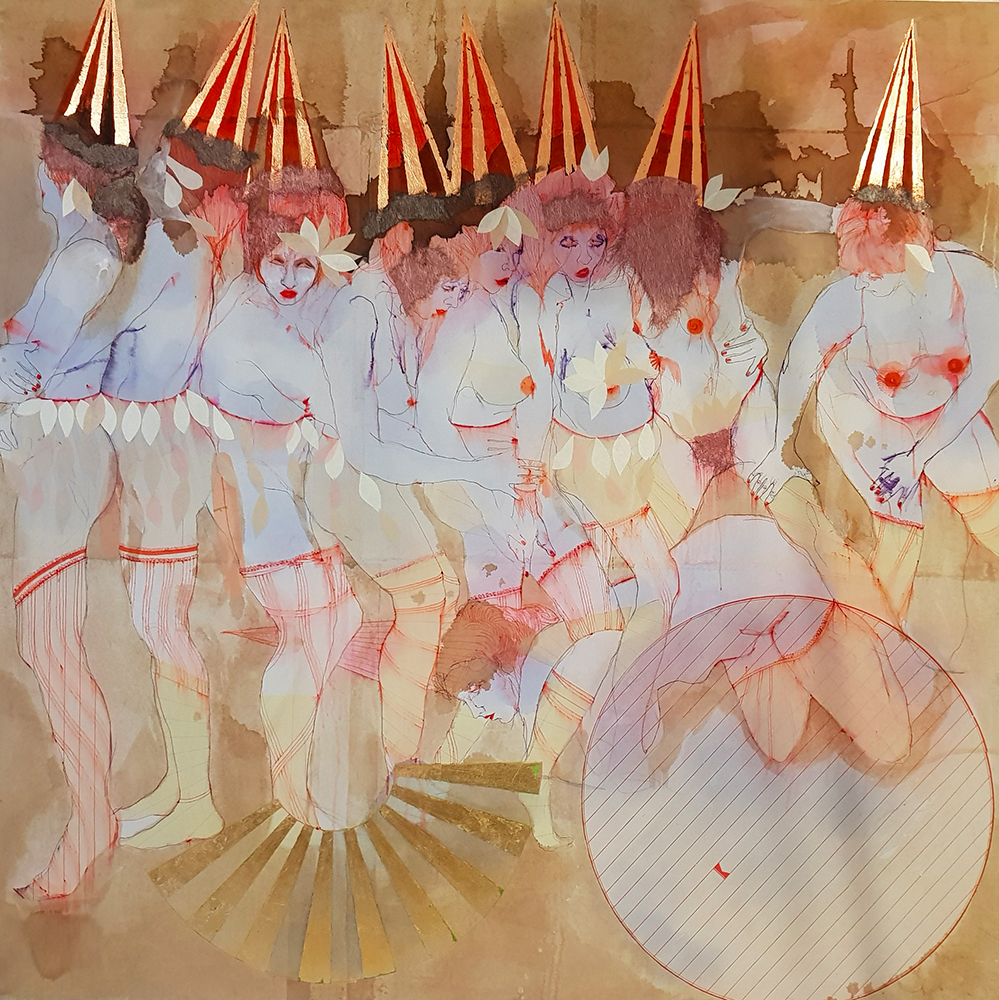 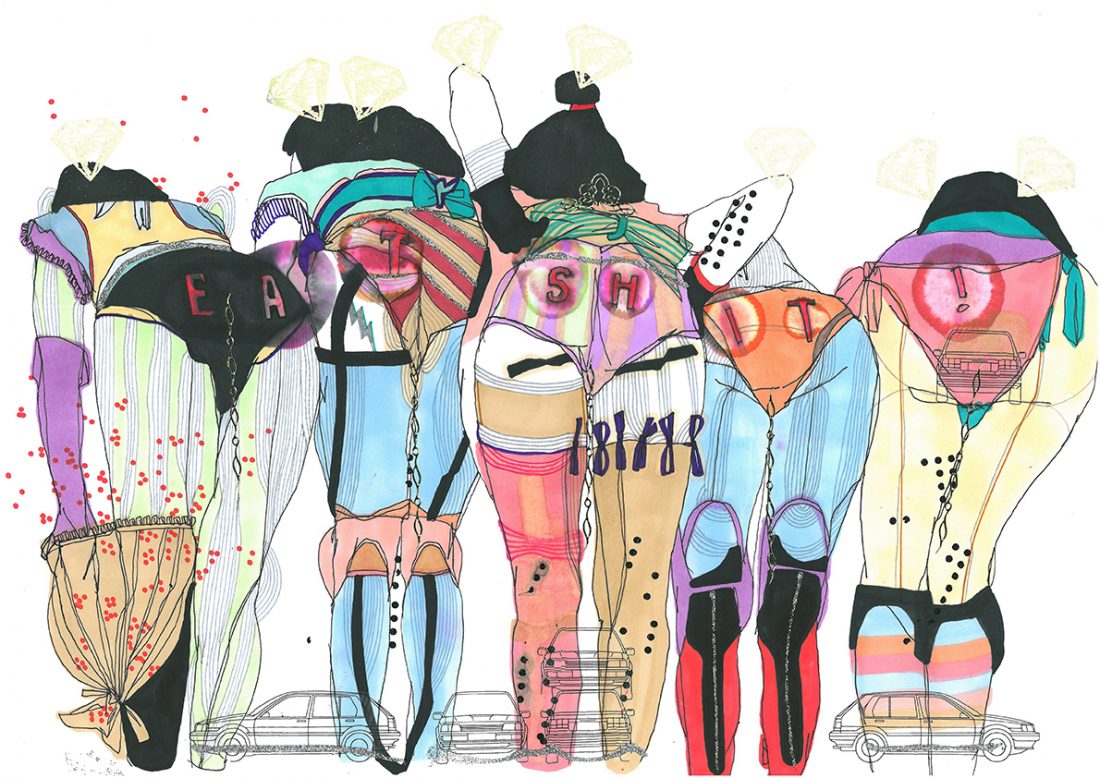 Hell is ‘round the corner

The wonders of a tiny existence

It is unclear whether the events of our lives are actually connected by threads, or if a necessity to connect places, people and things into an ideal map naturally belongs to us. Randomness is not easily discernible from a supreme order; nevertheless, we can attempt to decode its mysteries. Elena Monzo, who reached a fundamental point of reflection within her artistic journey, has now traced an itinerary of the fundamental stages of her path: a series of stages she has crossed both physically and spiritually. As a result, she detected in her recent experience, in her restless journey in search for humus, an unexpected, and yet palpable silken road. At her latest point of destination – Soncino, a town near Cremona – the artist took a stroll down memory lane. The Rotary Club invited Elena Monzo to organise a solo exhibition at the Filanda Meroni, a former textile factory that is now a Museum of Silk. The museum includes a private collection of tools used for fabric production, thread reeling and supply of silkworm eggs, but it also exhibits promo materials and period films from silkworm breeding companies. This invitation allowed Elena Monzo to experiment with a new interpretation of her work.

The cities she visited acquired a new meaning and thus her personal Silk Road was born. Amid the artist’s numerous experiences in artistic residences, the most significant ones include China (Shanghai, 2014), Japan (Tamashima, 2013), Lebanon (Beirut, annual stop since 2013) and Italy, Cosenza (2017). All these places can be related to silk in one way or another.

The Chinese were the first to obtain silk from the cocoons of the Bombyx mori: they tamed these tiny creatures in the third millennium BC. A cocoon was even found in a Neolithic grave. Initially, only members of the imperial family and members of their court were allowed to wear silk clothes, but starting from the 7th century BC this permission was extended to anyone who was simply rich enough. Many Greek and Roman authors, including Homer, Aristotle, Herodotus, Strabo, Varro, Seneca, Pliny the Elder and Martial, referred to silk and its trade in their literary works: the West was of course anxious to unveil the secrets of its manufacture.

History and myth often cross their paths. The origins of silk are shrouded in mystery, lost within a series of legends with countless versions. All these stories, however, tend to have something in common: they share the unquestionable element of preciousness of this product and the key role a female figure played in the discovery, the diffusion, the cultivation and production of silk. According to one of these legends, the Chinese empress Lei-Tsi, or Xi Ling Shi, wife of the Yellow Emperor, was taking a tea in the shade of a mulberry tree when a cocoon fell into her cup. Because of the hot water, the silk thread came undone and took off. The woman thus realised that this thread was suitable for the production of precious fabrics and began to grow cocoons and weave silk.

Another story tells us that the mystery of this wonderful fabric was jealously kept secret until a Chinese princess, who was to marry an Indian prince, hid in her hat the eggs of the silkworm and the grains of mulberry tree in order to be able to continue producing silk in India. This is how silk first crossed national borders. Furthermore, they say that the emperor Justinian once entrusted two monks with a special mission: to obtain the precious eggs no matter the cost, even with the use of deception. Once in Serinda, these monks stole the eggs and hid them inside their travel sticks, which actually were hollow bamboo canes, and thus illegally transported them to Byzantium.

The ancient Silk Road developed in the 2nd century AD. This famous commercial route started in China and connected Asia with Africa and Europe for many centuries. Not only did it create strong economic bonds, but it also triggered important cultural and religious exchange. This itinerary was such a complex weave that it became a rich source of inspiration for our Artist, whose works voraciously absorb inputs, materials and iconographic sources from multiple contexts, in an extraordinary cultural syncretism.

When working in Japan, Elena Monzo found herself immersed in another world that is deeply connected with the production of silk. Japanese silk has indeed undergone a centuries-long evolution, so as to become the most precious and expensive silk in the world. An ancient bond exists between Italy and Japan as far as production of cocoon eggs is concerned. This bond dates back to the second half of the Nineteenth century, when diplomats and traders went to Japan in search for cocoon eggs: the first Italian silk mission to Japan was carried out in 1869.

During the reign of Emirs, Lebanon was also well-known as a spot of silk production, although, unfortunately, today this industry is no longer thriving. In Bsous, just a few kilometres from Beirut, a factory has been transformed into a silk eco-museum. Beirut is a fundamental place for the growth of our Artist, who since 2013 has been spending one month a year at the residence of Fadi Mogabgab, a gallerist in Aïn Zhalta, where there is a press with a small edition attached.

In 2017 she took part in the Bocs Art artistic residence in Cosenza, yet another place that is historically interwoven with silk: the Cosenza area was, until the first half of the 19th century, one of the most important producers of raw silk in Southern Italy. The local countryside is rich in mulberry trees and many peasants successfully bred cocoons. The main street in the old town, once known as Strada dei Mercanti, was full of shops selling precious silk fabrics. In the nearby village of Mendicino there used to be an ancient textile factory, Filanda Gaudio, which today houses a Dynamic Silk Museum.

Elena Monzo’s Silk Road crosses landscapes and stories, intersected by multiple cultures. These stories are inhabited by lands of mulberry trees, cocoon breeding grounds, spinning mills, women who devote their lives to silk, intersections of trade roads, yarns and magnificent fabrics. A series of events accompanies the Artist from her native countryside in the province of Brescia to the South of Italy and to the East. It is a long journey, made of departures and returns, where the distances connect and disappear in the Bombyx mori’s brief life cycle. A tiny insect that inadvertently creates a precious story.

When a Bombyx mori egg hatches, it is always hungry. The larva eats its own shell and sticks to the mulberry leaves; during its short life as a caterpillar, which lasts about five weeks, it sheds its skin four times. And then, one day it stops eating and begins to salivate, thus preparing a cocoon. The creature will wrap itself in this cocoon in order to transform, first in a chrysalis and, subsequently, in a butterfly. Some cocoons are kept to produce more eggs, while others are used to obtain the thread that will be worked. In this case the chrysalis is killed in dryers before completing its metamorphosis. When moths leave their cocoon, their essential function is reproduction: once outside, they get ready for mating. Afterwards, the male moth dies, whereas the female lays the eggs before also ending its life cycle.

The genesis of silk procreation, a biological and creative cycle, is the generating idea from which the Artist’s seven big works arise. The artworks were made on Japanese canvas-backed rice paper. Elena Monzo extracts a free inspiration from which both obvious and evanescent suggestions emerge: here we have cocoons, caterpillars, reproductive references, courtship dances, reminiscences of liberty style (which can be found in many silkworm-themed posters), echoes of crossed cultures, numerological symbols, in a refined composition that reveals the artist’s ability to set in motion heterogeneous flows. The silky shades of these works are enriched with vigorous touches of more intense colours: a vital red, a mystic purple blue and a royal gold. Once again, the artist manages to surprise us with the vitality of her work, with its metamorphosis, which nevertheless always stays true to its own grapheme.

The story of the Bombyx mori is the transformation of a tiny insect’s existence, whose short life cycle is reverted to precise repetitive phases, into a thousand-year-old work of art. Not only has its cocoon transformed into a fine silk thread, but its very existence has generated a flow of events, contaminations, confrontations that travelled to distant lands. Its story evokes every artist’s desire to transform his or her works into pure wonder, into a higher and more eternal essence. 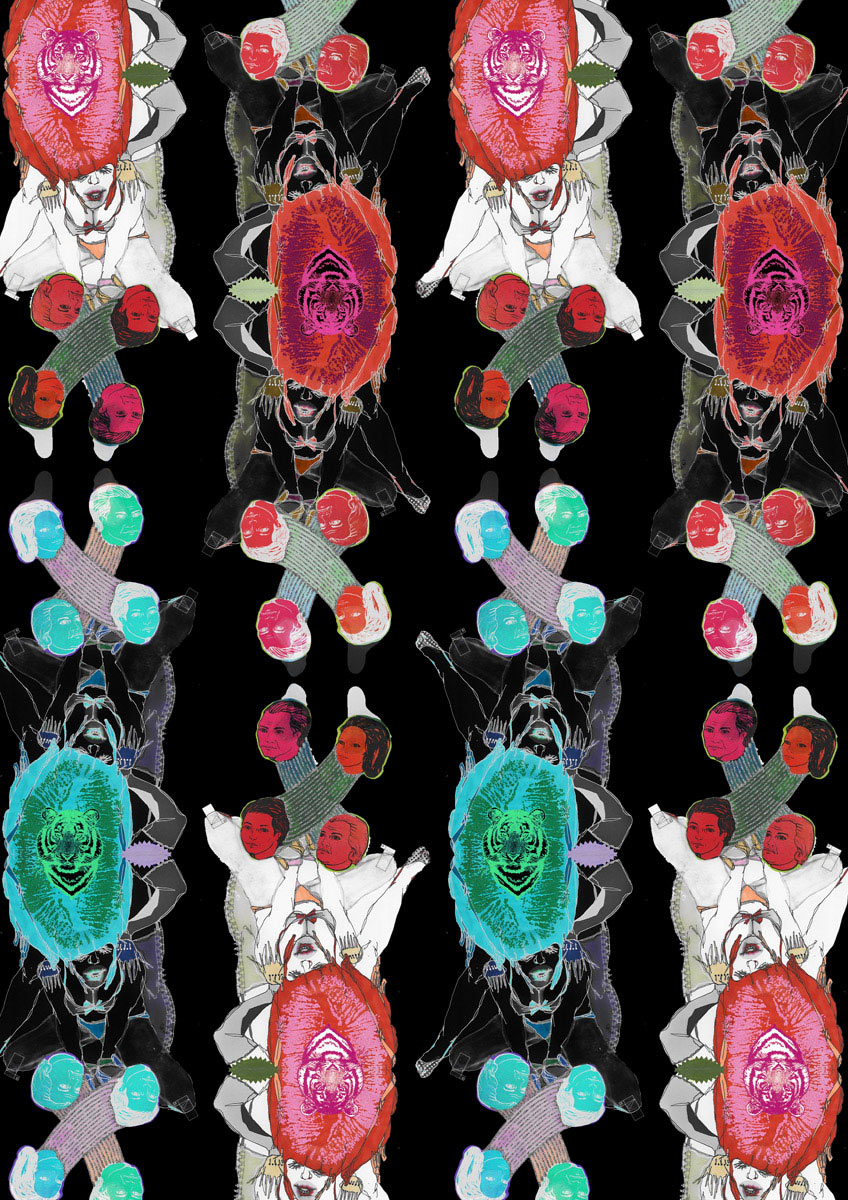 “Why are you there, moon, in the sky? Tell me

Why are you there, silent moon?” 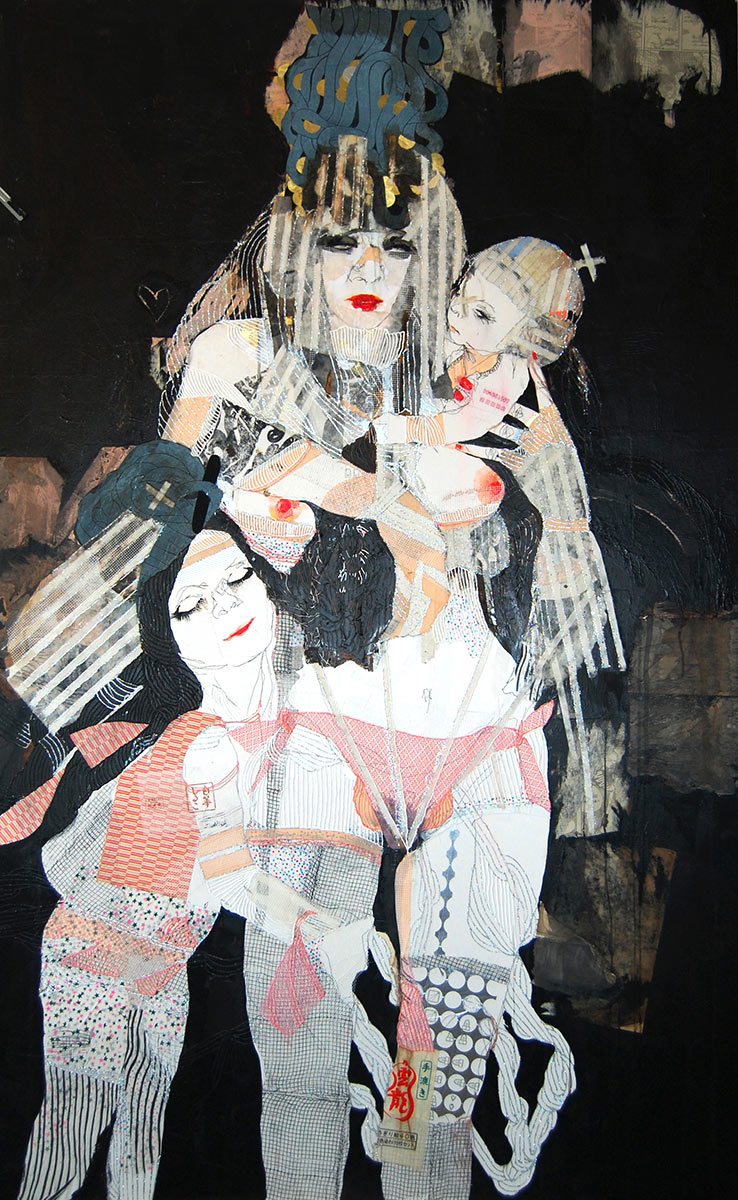